How Markets Could React To Biden vs. Trump on November 3rd.

Given the high stakes of both the results of the 2020 election and the voting process itself, the stock market has already spent months observing and weighing possible outcomes. Of course, like most who remember the unexpected results of the 2016 election, there remains a lot of uncertainty about whether the odds of this election can really be calculated, especially given the prevailing sense of unpredictability that has characterized the previous four years.

Nonetheless, it bears looking at a few of the most likely outcomes that might unfold on November 3 and the days following it to anticipate how the market could react.

The first and, at the moment, most probable outcome according to current polling data is that Joe Biden wins the Presidency, flipping many of the key Midwestern states that went to Donald Trump in 2016 by slim margins. In this scenario, Democrats, who are already highly anticipated to flip Republican seats in Arizona and Colorado, could also make gains in typically safe Republican states like North Carolina, South Carolina, Iowa, and Montana that are at risk if the turnout for Biden is strong enough to help down-ballot Democrats.

In some respects, this scenario would not sit well with investors who have lauded the current administration’s pro-market, anti-regulatory approach. Increased regulatory rhetoric directed at sectors like technology, healthcare, and financials, combined with Biden’s economic platform would likely contribute to some negative market sentiment.

Joe Biden’s own stated economic policy focuses mostly on increasing the federal minimum wage to $15/hour and increasing the corporate tax rate to 28% from the current 21% that was enacted during the 2017 tax cuts (though still below the 35% that was in place prior to that).

Industry-wise, Biden has signaled he is not in support of single-payer government healthcare, nor is he particularly outspoken about breaking up or regulating financial or technology companies, battles which are more likely to play out in the legislative chambers.

Biden has also signaled his support of greater federal investment in the nation’s renewable energy and infrastructure resources to the tune of $2 billion, a move that likely spells the end for some domestic oil exploration on government lands and could signal further upheaval in the already volatile global energy market.

On the other hand, a Democratic sweep could also directly lead to further economic stimulus as well as an end to trade tensions with China. Both outcomes would be seen as positives by investors.

Though the fact that current polls show the Senate map is far more contested than the Electoral College map, a Biden win and Republican majority in the Senate may be the eventuality most hoped for by investors.

From a policy standpoint, a split government would likely produce more gridlock, which may in turn be a boon for investors. History tells us that markets perform best under a divided government.

While unlikely given current polling data, Donald Trump may again defy probability and secure another term in office. In virtually any scenario this happens, Republicans will also keep control of the Senate, even if it is in a 50-50 split in which Vice President Pence would serve as the deciding vote.

This eventuality, as unanticipated as it is, will also probably yield the most unexpected results. President Trump’s first term already delivered most of the longstanding wishes of the Republican platform: tax reform, sweeping deregulation, judicial nominations, and the virtual destruction of the Affordable Care Act.

While this may be a case of “promises made promises kept,” it has also left Trump noticeably vague on what else he as the head of the Republican party can deliver over another four years. His presidential agenda for a second-term echo many of the same talking points of four years ago.

What is certain is this outcome would signal continued trade tensions with China and more back-and-forth on stimulus talks.

Should you Build a Bunker?

It’s important to remember that markets are driven by far more than just who wins the White House. The tables below show the average two-year (dark blue) and four-year (light blue) returns of a composite stock market index under various scenarios, as well as average returns during each year of a presidential term. 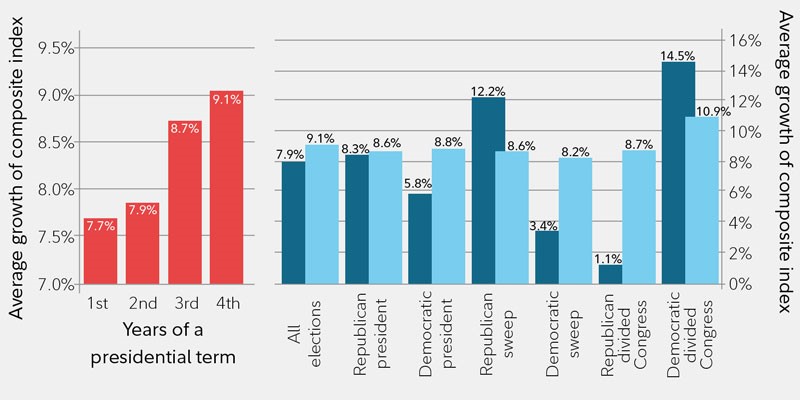 As November 3 approaches, traders and investors should keep an even head entering into the election. The results that follow, while indicative of the policy approach of the next four years, will ultimately have a limited impact on long-term volatility.

This will likely be the case even in a contested election. Though history shows us that a contested election would cause elevated volatility in the short term, the market often looks past these results and towards other economic forces. Looking back at the 2000 presidential election, it now seems obvious that the bursting of the dotcom bubble and 9/11 terrorist attacks had far more serious long-term implications for the market than the three-week period of presidential uncertainty.

Leveraged and inverse ETFs pursue daily leveraged investment objectives which means they are riskier than alternatives which do not use leverage. They seek daily goals and should not be expected to track the underlying index over periods longer than one day. They are not suitable for all investors and should be utilized only by investors who understand leverage risk and who actively manage their investments.

Market Disruptions Resulting from COVID-19. The outbreak of COVID-19 has negatively affected the worldwide economy, individual countries, individual companies and the market in general. The future impact of COVID-19 is currently unknown, and it may exacerbate other risks that apply to the Funds.

Information Technology Sector Risk: The value of stocks of information technology companies and companies that rely heavily on technology is particularly vulnerable to rapid changes in technology product cycles, rapid product obsolescence, government regulation and competition, both domestically and internationally, including competition from competitors with lower production costs.

Direxion Shares Risks: An investment in the ETFs involves risk, including the possible loss of principal. The ETFs are non-diversified and include risks associated with concentration that results from an ETF’s investments in a particular industry or sector which can increase volatility. The use of derivatives such as futures contracts and swaps are subject to market risks that may cause their price to fluctuate over time. The ETFs do not attempt to, and should not be expected to, provide returns which are a multiple of the return of their respective index for periods other than a single day. For other risks including leverage, correlation, daily compounding, market volatility and risks specific to an industry or sector, please read the prospectus.