Among the myriad longstanding issues that have plagued the American legislative process, from Medicare to immigration, infrastructure has been among the most universally anticipated. It’s an issue that transcends party lines and has the most immediate benefit to the welfare of the country, its people and its businesses.

After decades of failing grades on the American Society of Civil Engineers’ quadrennial infrastructure report card, it finally seems as though a comprehensive infrastructure revitalization is on the horizon with the Biden administration’s recently announced $2.3 trillion infrastructure proposal.

While the final form of the bill, and even its passage through both houses of Congress, is not set in stone, it is one of the largest U.S. spending proposal in generations. And while the package is currently broadly opposed by Republican members of Congress, some form infrastructure spending is likely to make its way through the legislative process over the next two years of Democratic control of both chambers.

Given the massive amounts of capital that stand to flow through the U.S. economy as a result of the $2 trillion package, it’s beneficial to look at where the money is likely to flow to and how those funds may impact a few of Direxion’s funds, both in the short and long term. Starting from the areas that stand to see the most immediate benefit to those that may accrue prominence more slowly, we’ll attempt to anticipate what the future of infrastructure might mean for the future of the market.

Of the $2 trillion dollars in question, roughly one-third of the funds are planned, in some way, shape or form, toward bolstering the nation’s roads, bridges, waterways, rail lines and other assorted arteries of commerce. Additionally, $300 billion is earmarked for manufacturing investment targeted toward semiconductor research, pandemic preparedness and general domestic manufacturing.

The industrial sector has already seen an uptick in investor interest through the initial months of 2021 thanks to cyclical recovery, as evidenced by the 41% rise in the Direxion Daily Industrials Bull 3X Shares (DUSL) since February 1st. The new proposal has the potential of generating increased attention to the sector as the specifics of the package get hammered out. 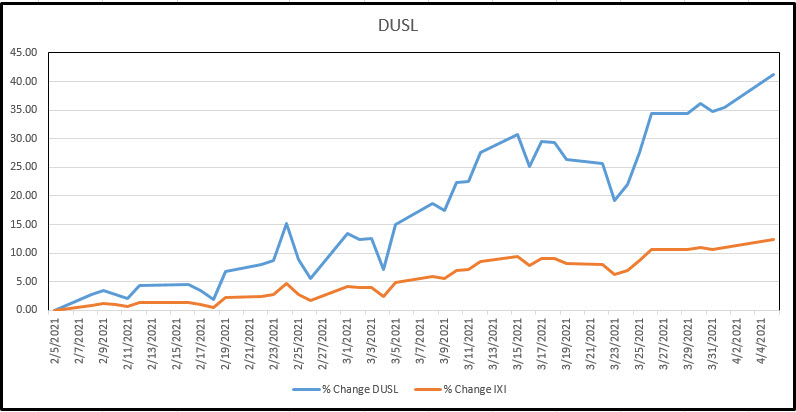 Bloomberg. Data Represents Past performance and does not guarantee future results. The investment return and principal value of an investment will fluctuate. An investor’s shares, when redeemed, may be worth more or less than their original cost. Current performance may be lower or higher than the performance quoted. For standardized and month-end click here.

Regardless of whether the entirety of the $2 trillion package gets passed, infrastructure spending has some support among the U.S. public. Even if the proposal’s scope is cut by half, manufacturing still stands to gain by virtue of the necessary revitalization of America’s roadways, waterways, airports and rail lines.

Bloomberg. Data represents Past performance and does not guarantee future results. The investment return and principal value of an investment will fluctuate. An investor’s shares, when redeemed, may be worth more or less than their original cost. Current performance may be lower or higher than the performance quoted. For standardized and month-end click here.

Assuming some form of infrastructure spending makes its way through the sausage grinder of the American legislative process, the industrial sector at large, and transportation industry specifically, stand to reap the immediate and long-term benefits. If nothing else, investors should keep a keen eye on the space as the proposal makes its way toward the beltway.

Less acutely tied to the idea of infrastructure, the American healthcare system is in dire need of revitalization. The current pandemic alone is evidence of this need. The average age of medical facilities in the U.S. is about 11 years, and many medical facilities are struggling to keep up to date with the nation’s rising elderly population and the increasingly apparent threat of devastating global pandemics.

The Biden administration’s proposal introduces more than $400 billion into healthcare services for the elderly, those with disabilities and American service veterans. As it stands, the need for these upgrades is one of necessity rather than opportunity, as the baby boomer generation increasingly enters their 70s.

Major insurers and pharmaceutical firms like those in the Direxion Daily Healthcare Bull 3X Shares (CURE) stand to see an uptick in both demand and resources in the coming years. We believe the increases to healthcare spending and modernization of the nation’s medical infrastructure will only stand to hasten the industry’s expansion through the next decade.

Keep Your Head in the Cloud Computing

Finally, and perhaps most critically, Biden’s proposal introduces $100 billion for technology investment into nationwide broadband and fiber optic internet access, which, over the long term, stands to draw investor interest into the segment and impact the performance of the Direxion Daily Cloud Computing Bull (CLDL).

While the allocation of the funding is targeted primarily at lowering prices and improving access to high-speed broadband for America’s rural areas over the next decade, the package to also opens the door for private partnerships with internet infrastructure providers. These relationships, along with expanded access, will ideally build up the nation’s broadband and data network toward greater 5G access beyond the edge computing framework currently being established around urban hubs.

This is an area that the U.S. stands to find a relatively early lead in pioneering. While domestic investment in high-speed internet has lagged that of China, which has spent about $30 billion on connectivity in the past two years alone, the proposed U.S. funds could represent a massive advantage in communication capabilities.

Investment in internet access and the potential for 5G and high-speed cloud networks stand to benefit the economy as a whole, from technology and logistics to healthcare, and may ultimately represent the future of the American and global economies.

Through the first quarter of 2021, there’s only one thing that’s certain. Whether you’re a bull or a bear, Direxion is with you. Our leveraged ETFs are powerful tools built to help you: