As the epicenter of the global COVID-19 pandemic and, therefore, the first to grapple with its devastation, China has spent the pandemic year slightly ahead of the curve when it comes to monitoring, containing and, ultimately, recovering from the effects of the virus. The nation’s dramatic response to COVID-19, including the accommodative monetary policy adopted by the People’s Bank of China, helped it to maintain its track record of economic growth through a year when many nations, including the U.S. experienced some degree of GDP contraction.

However, given China’s slight head start on the pandemic timeline and its continued economic resilience, the nation’s central bank started 2021 by signaling its intention to normalize policy through the year and reduce some of the excess liquidity that has built up in its markets. This is as a record number of foreign investors have funneled into the country’s equity markets, surpassing the U.S. for the first time in terms of international investments.

Despite these signals from the central bank, as well as some direct action already taken, Direxion’s stable of China leveraged funds have shown little sign of slowing from the pace they have so far set in the final weeks of 2020 and into 2021.

Already this year, the PBoC has withdrawn roughly $12B from its open market operations in an attempt to reduce rising asset prices that have run up over the course of the more lenient borrowing environment.

That was in late January, and while Chinese markets took a slight dip as a result of the action (and in anticipation of future monetary tightening), core Chinese equity has resumed its upward trajectory into February. The FTSE China 50 Index rose about 5% through the initial weeks of the month and about 10% year-to-date, which has put the triple leveraged Daily FTSE China Bull 3X Shares (YINN) up nearly 40% YTD. 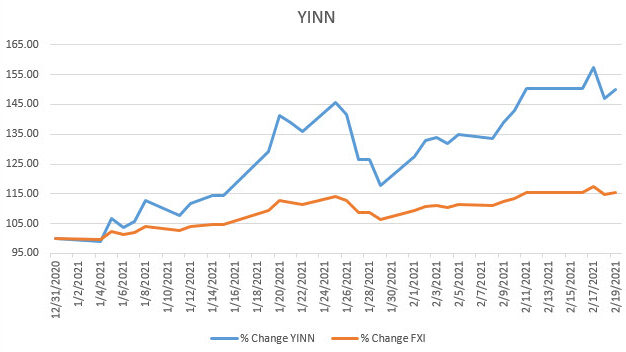 Bloomberg. Past performance does not guarantee future results. The investment return and principal value of an investment will fluctuate. An investor’s shares, when redeemed, may be worth more or less than their original cost. Current performance may be lower or higher than the performance quoted. For standardized and month-end click here.

Major components of the index in the financial space like The Industrial Bank Co. and Ping An Bank Co. have obviously benefitted from the lower liquidity and rising rates. But continued resilience among the industrial and consumer segments from the likes of electrical component manufacturer Midea Group or  Baoshan Iron & Steel, and even strong sales from liquor producers like Kweichow Moutai and Wuliangye Yibin, have supported this broad-based momentum within the Chinese equity.

Although this strong equity performance bodes well for the overall strength of the Chinese economy, it also paves the way for the central bank’s planned monetary tightening. Add to that signs of rising price pressure among manufacturers and steady demand by consumers and it may not be too long before The PBoC again looks to ease an inflationary economic environment.

Still, given the tenuous first steps the world seems to be taking from under COVID-19, the recovery may very well be given room to run. China ended 2020 with a record trade surplus, and it will be interesting to note whether that statistic was aided by constraints of the pandemic or if it only marks the beginning of further growth for the country.

Of course, these core sectors only tell part of China’s growth story circa 2021. While the nation’s financial and industrial concerns continue to support its international trade, China’s online corporate monoliths continue to expand in both size and scope.

In the first few weeks of this year alone, The Direxion Daily CSI China Internet Index Bull 2X Shares (CWEB), which tracks the CSI Overseas China Internet Index, has surged by more than 65%. This is compared to the roughly 100% gains the ETF posted through all of 2020. 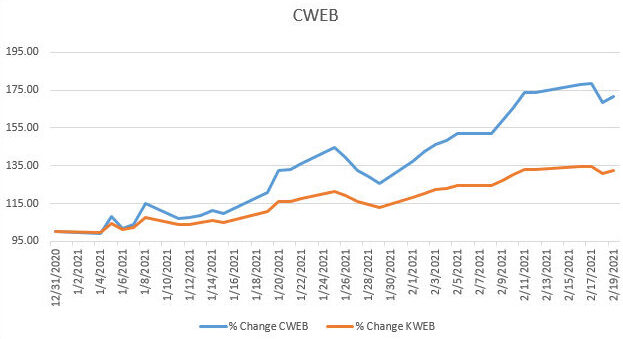 Bloomberg. Past performance does not guarantee future results. The investment return and principal value of an investment will fluctuate. An investor’s shares, when redeemed, may be worth more or less than their original cost. Current performance may be lower or higher than the performance quoted. For standardized and month-end click here.

While the growth picture for China’s increasingly robust online landscape has always been fairly bullish, the recent performance among online staples like Baidu and Tencent Holdings and ecommerce companies Meituan and Pinduoduo has put a renewed spotlight on the persistently high growth expectations for the sector. This as the nation just announced it had reached almost 1 billion internet users by the end of 2020.

Of course, given China’s history with regulating and censoring the online landscape, as well as the more universal concern of how giant online companies threaten to become monopolistic, there are potential roadblocks to the rapid rate of growth the sector has seen in recent months. With regard to the latter concern, the Chinese central government just finalized anti-trust regulations that aim to stave off some of the anti-competitive practices that other free market countries have been more lax in implementing but which have roiled online giants like Alibaba Group Holdings with myriad antitrust lawsuits.

While the success or failure of these regulations is yet to be seen in either encouraging competition or supporting growth, the fact that they are being implemented at all may in fact be another area in which China is getting the jump on Western nations that are still debating whether or not monopolies are even a bad thing. What’s more, China’s regulations are, at the moment, fairly undefined, putting the onus of proof on regulators as the government gets a handle on how to effectively oversee the industry without hampering its growth.

With the worst of the pandemic seemingly in the rearview, China’s seems to have entered a new growth phase in its history, adopting a firm and decisive grip on how it wants to grow in the coming years.

But while the future for Chinese markets remains tied up with the policy set forward by its central bank and ruling communist party, Chinese stocks will likely still find influence from global asset trends. At the moment, equity markets around the world remain on a growth trajectory, and the measures so far taken by the PBoC have not slowed enthusiasm for the investment outlook within China.

Eight trading weeks into 2021, there’s only one thing that’s certain. Whether you’re a bull or a bear, Direxion is with you. Our leveraged ETFs are powerful tools built to help you:

Market Disruptions Resulting from COVID-19:  The outbreak of COVID-19 has negatively affected the worldwide economy, individual countries, individual companies and the market in general. The future impact of COVID-19 is currently unknown, and it may exacerbate other risks that apply to the Fund.