On March 31st, 2021, the White House officially announced a nearly $4 trillion (the “t” is not a typo) in total investment plan called the American Jobs Plan. While about $1.8 trillion of the total is slated to go toward the “families plan” section, another $2.3 trillion is the “infrastructure plan”. The veritable mountain of spending is catching a huge amount of attention for good reason and churning up speculation about how it will affect the economy and the infrastructure-focused companies that could benefit the most.

Support for the bill is split fairly evenly down party lines, which likely signals a long road ahead before it either does or does not become law. Whether or not the entire bill, pieces of it, or none of it are passed, just the proposal of it is a huge signal that the Biden administration is intent on boosting government spending on American infrastructure projects on a grand scale. This is likely to be very good news for many companies in public infrastructure, transportation, and other large industrials. In addition to the amount of money, the overall targeted nature of the proposed bill would be aimed at supporting specifically American businesses and workers.

Which Trades Could be the Biggest Winners?

Investors with a bullish outlook looking to invest in possible opportunities presented by the proposed infrastructure package may want to consider positions in the American industrial and transportation sectors, and short-term traders might want to take a hard look at ETFs with exposure to them such as the Direxion Daily Industrials Bull 3X Shares (DUSL), and the Direxion Daily Transportation Bull 3X Shares (TPOR).

Industrial companies based in the U.S. such as Honeywell, Boeing, Caterpillar, and General Electric are likely candidates to be at the forefront of government contracts for infrastructure spending and could end up seeing significant revenue boosts even if just a part of the full package goes through. In the case that the entire bill is passed, the financial upside for American industrial giants like these could be enormous. The sheer size and scope of the infrastructure package suggested also means that it likely wouldn’t just affect immediately related companies, but also players in the industrial support and enablement industries.

Cumulative Returns. Source: Bloomberg. Data represents past performance and does not guarantee future results. The investment return and principal value of an investment will fluctuate. An investor’s shares, when redeemed, may be worth more or less than their original cost. Current performance may be lower or higher than the performance quoted. For standardized and month-end click here.

Additionally, transportation and logistics companies like FedEx, Norfolk Southern, and Landstar System show huge potential to capitalize on better and more advanced roads, railways, and other projects. In an America with significantly more transportation infrastructure support from the federal government, opportunities may abound for already significant and impactful organizations like these to boost their revenues and profits higher.

Cumulative Returns. Source: Bloomberg. Data represents past performance and does not guarantee future results. The investment return and principal value of an investment will fluctuate. An investor’s shares, when redeemed, may be worth more or less than their original cost. Current performance may be lower or higher than the performance quoted. For standardized and month-end click here.

It’s still early innings for President Biden’s bold spending proposal. The latest surge in inflation indicators is fueling a political threat to the plan, along with a historically disappointing jobs report on May 7th. But one thing’s for sure:

Whether you’re a bull or a bear, Direxion is with you. Our leveraged ETFs are powerful tools built to help you: 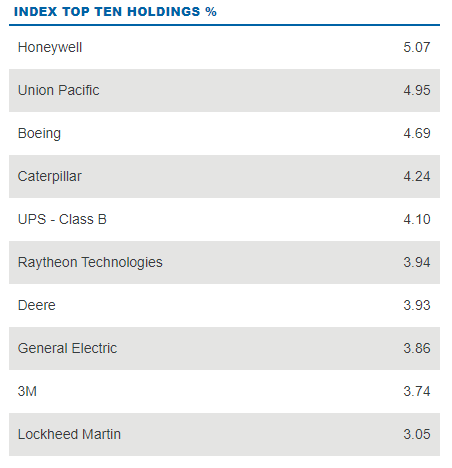