No investor has been rewarded quite like tech bulls in 2020. But the Department of Justice’s antitrust lawsuit against Alphabet represents a risk to that thesis.

The lawsuit alleges the company has engaged in monopolistic practices through the dominance of its advertising and search engine policies, forcing advertisers and users to accept onerous terms in order to engage its properties. Of course, Google contends that this is a natural extension of its innovation and acquisitions. Consumers and businesses prefer their platform, anyone who doesn’t like playing by their rules can take their business elsewhere.

Whether or not the government is able to prove its case could have long-term implications toward the way business functions online, potentially influencing the very nature of internet use.

From Niche to Nexus

The 1990s represented the birth of the corporate internet landscape, one in which companies could leverage the new virtual ecosystem to reach customers and market their goods and services much like in the real world. Unfortunately, this new model relied on old assumptions of how marketing and commerce worked in the real world. For as many innovative companies that emerged in the decade, there were hundreds more that simply saw the internet as just another sales funnel, no different from a well-placed billboard or leaflet.

Appropriately enough, this period of speculative excess erupted in an equally spectacular fashion at the turn of the century in the bursting of the dot-com bubble. In the decades that followed, the companies that survived attempted to refocus their efforts. Instead of viewing internet users as customers, they made them part of the product, if not the product itself.

The results are transformative. Just look at some of the companies in the Direxion Daily Dow Jones Internet Bull 3X Shares (WEBL). Online marketplace eBay leveraged its user base to perpetuate its reputation as a destination for deal seekers and hobbyists. Bookseller Amazon exploited its virtual status by setting up a decentralized logistics network that delivered its customer’s products at unprecedented speed. Online directory Facebook turned its entire focus to its users, allowing them to define their own online experience with the people and things they loved the most. The users became the product. 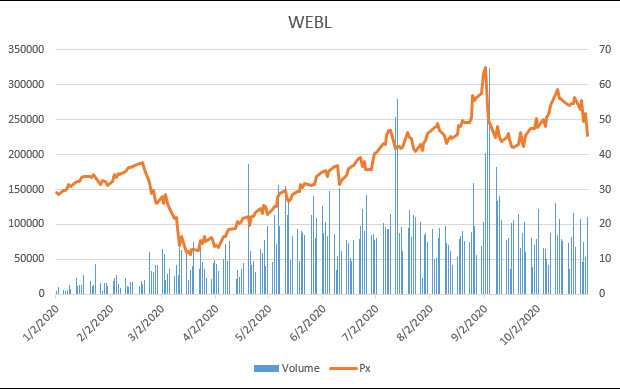 For the most recent month-end and standardized performance click here.

And then there is Google, which never truly lost its luster in the dot-com explosion, sticking as best it could to its core mantra of “Don’t be evil” while simultaneously delivering new and remarkable inventions to the internet at seemingly no cost. From its core search engine technology that made order out of chaos, to a navigation software that accurately brought the world to the computer screen, to an entire suite of workplace software that made many expensive alternatives obsolete.

Everything the company did was seemingly in service of making the internet a better place to be, a virtual utopia available to anyone willing to type those six little letters into their browser. In 2017, the company announced it had reached 2 billion active users across all of its properties. The global population at the time was 7.5 billion.

The Definition of Monopoly

Unlike previous investigations into Google’s anti-competitive practices, the current lawsuit takes direct aim at a core business online model: leveraging an internet ecosystem tailored toward keeping clients and users dedicated to their business as opposed to any competitors. Of course, it also means buying out any competitors who might stand a reasonable chance of doing that anyway.

The lawsuit represents a distinct change of course from the regulatory approach the U.S. government has taken toward these online monoliths during the period of their growth. Data collection, preferential treatment of its software and, of course, horizontal and vertical integration through aggressive M&A were all on the table so long as they didn’t hurt the pocketbooks of the average consumer.

The current case against Google could prove to be a landmark shift in that policy, one that again forces businesses and consumers to reconsider exactly what kind of beast the internet is and what it might become as the world comes to grasp with just how central a role it now plays in the daily workings of the contemporary world.

For the past three decades, the U.S. government has treated these companies much like the early pioneers of the dot-com bubble: as just another sales funnel for business, nothing more, and nothing less. Only now is that assumption being reconsidered and litigated within the realm of government. Can the internet be treated like just another marketplace when consumers’ primary way of interacting with it is through just a handful of companies? Can virtual properties be allowed to grow unabated if it means vital and necessary services are in the control of just a single monolithic corporation? Should a handful of tech designers control the way the world thinks, acts, and votes.

There are, unfortunately, no simple answers to the questions posed by the current state of the internet. It’s obviously something larger and less clear cut than anyone with the reigns of power had considered it to be just 10 or 20 years ago.

The only real takeaway from this unfolding narrative might be this: in 2015, when Google announced it would be restructuring under the Alphabet umbrella, it did so in service of its various business units. These include companies engaged in everything from fiber optic internet service to urban planning to health monitoring. Each of these business units came about through a combination of Google’s technology innovations, its business acquisitions and its user data insights.

No one thing made Google or Alphabet what it is. The company came about through the freedom of access provided by the internet. Whether that freedom can survive through the next decade or what shape it might take in the future will likely be decided, for better or worse, by its growing prominence in the lives of the 4.5 billion people that connect to it.

Investing in a Direxion Shares ETF may be more volatile than investing in broadly diversified funds. The use of leverage by a Fund increases the risk to the Fund. The Direxion Shares ETFs are not suitable for all investors and should be utilized only by sophisticated investors who understand leverage risk, consequences of seeking daily leveraged investment results and intend to actively monitor and manage their investment.

Market Disruptions Resulting from COVID-19. The outbreak of COVID-19 has negatively affected the worldwide economy, individual countries, individual companies and the market in general. The future impact of COVID-19 is currently unknown, and it may exacerbate other risks that apply to the Fund.

Dow Jones®, Dow Jones Industrial Average® and DJIA® are trademarks of Dow Jones & Company, Inc. (“Dow Jones®”). Dow Jones® has no relationship to the Fund, other than the licensing of those service marks for use in connection with the Fund’s materials. Dow Jones® does not sponsor, endorse, sell or promote any of the Funds.

Direxion Shares Risks – An investment in each Fund involves risk, including the possible loss of principal. Each Fund is non-diversified and include risks associated with the Funds’ concentrating their investments in a particular industry, sector, or geography which can increase volatility. The use of derivatives such as futures contracts and swaps are subject to market risks that may cause their price to fluctuate over time. Risks of each Fund include Effects of Compounding and Market Volatility Risk, Leverage Risk, Market Risk, Market Disruption Risk, Aggressive Investment Techniques Risk, Counterparty Risk, Intra-Day Investment Risk, and risks specific to the Information Technology Sector and Internet Company Industry. The market prices of internet securities tend to exhibit a greater degree of market risk and sharp price fluctuations than other types of securities as these securities may fall in and out of favor with investors rapidly, which may cause sudden selling and dramatically lower market prices. Additional risks include, for the Direxion Daily Dow Jones Internet Bull 3X Shares, Daily Index Correlation/Tracking Risk and Other Investment Companies (including ETFs) Risk, and for the Direxion Daily Dow Jones Internet Bear 3X Shares, risks related to Shorting and Cash Transactions, and Daily Inverse Index Correlation/Tracking Risk. Please see the summary and full prospectuses for a more complete description of these and other risks of each Fund.