Back to Basics: Hydrogen

Hydrogen has emerged, front and center, after the passage of the Inflation Reduction Act (IRA).* But, what exactly makes it so powerful?

Hydrogen is one of the simplest elements on earth, and can be used to store and deliver energy, making it a secondary form of energy, or “energy carrier,” similar to electricity. At the point of use, it produces zero emissions, but the production process is a different story. Hydrogen does not exist alone in nature and has to be extracted from other energy sources.

How Is Hydrogen Produced?

There are a few different ways hydrogen is produced, some more environmentally friendly than others. The cheapest method of hydrogen production comes from natural gas and the end result is known as “grey hydrogen,” but C02 is released in the process, which can be damaging to the environment when levels are too high. Blue hydrogen is produced similarly to grey hydrogen, but it includes a carbon capture element and acts as a transitory production method until a better system is widely adopted, which is where green hydrogen comes into play.

How Is Hydrogen Stored?

Hydrogen is a chemical energy carrier, which means it is only composed of molecules, not electrons. This molecular structure offers many benefits, including stability during storage and transportation. Hydrogen can be stored as gas, liquid, geologically, or through other materials that can absorb the element. It can also be combined with other elements to make hydrogen-based fuels. If adopted on a larger scale, hydrogen storage could eventually help balance seasonal variations in the power grid.

How Is Hydrogen Used?

Today, the main demand for hydrogen is refining and industrial use. The potential uses for hydrogen are vast, from power generation, to grid balancing, to steel production. One of the most promising applications for hydrogen is its use in fuel cell vehicles, which are beginning to gain traction as a transportation alternative. Fuel cell vehicles are powered by compressed hydrogen gas that transforms chemical energy into electric energy, resulting in zero emissions. 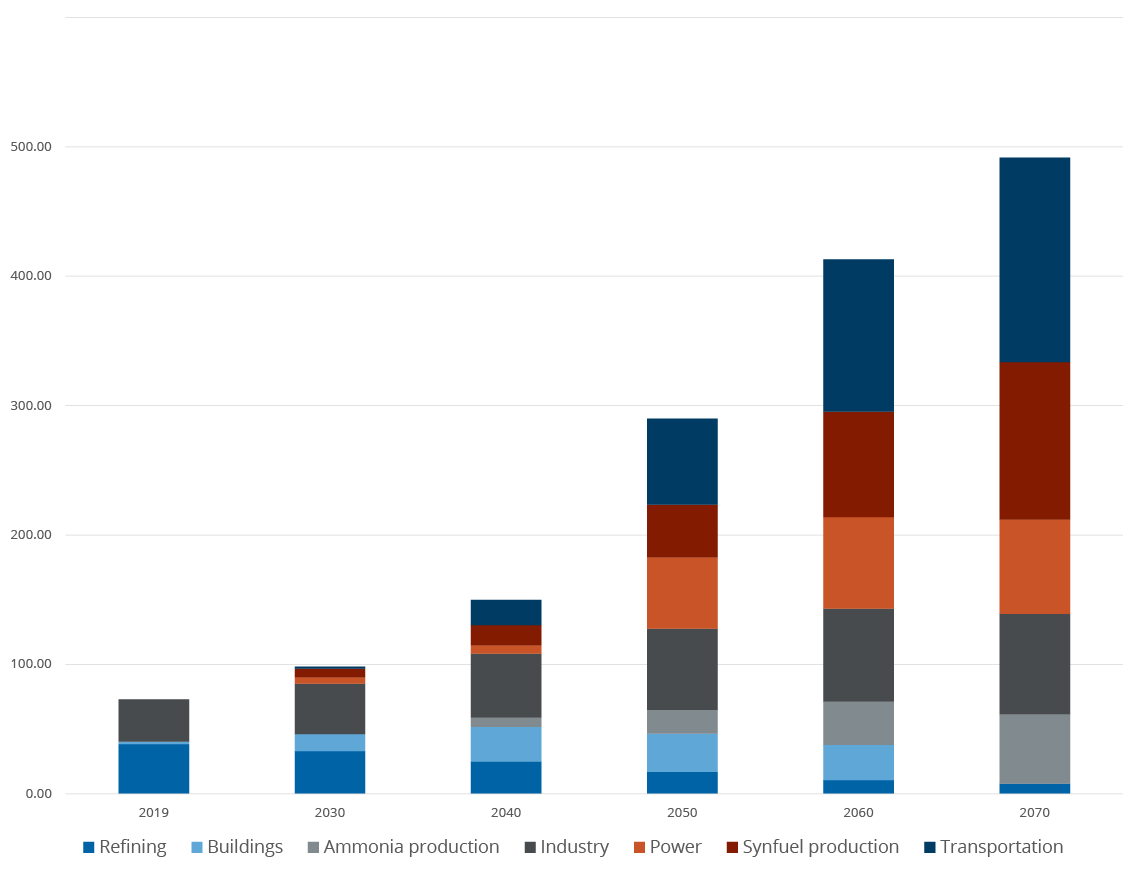 What Does The Future Hold?

In addition to the United States, countries around the world are rolling out ambitious net-zero emissions plans that contain provisions for green hydrogen, including Japan, Australia and South Korea.  Over 30 countries have separate hydrogen-specific “roadmaps,” some more robust than others, and many global corporations have followed suit. For example, Shell has recently decided to build Holland Hydrogen I, which will be Europe’s largest renewable hydrogen plant once operational in 2025. Similarly, INEOS is investing more than €2 billion into electrolysis projects to make zero carbon, green hydrogen across Europe. Its first plants will be built in Norway, Germany, and Belgium with investment also planned in the UK and France.

Domestically, companies are taking the cue from the government and prioritizing hydrogen projects. Amazon recently made a deal with Plug Power to provide green hydrogen to power long-haul trucks and forklifts, highlighting greater acceptance of hydrogen as a power source by the world’s second largest retailer, and Air Products plans to begin producing approximately 10 metric tons per day of green hydrogen in Arizona. To see top ten holdings, click here. Holding are subject to change.

For such a simple element, hydrogen is surprisingly complex when it comes to use, but its new prominence in the green energy space marks an important turning point. The Direxion Hydrogen ETF (HJEN), which seeks investment results, before fees and expenses, that track the Indxx Hydrogen Economy Index,** is one option to gain exposure to this space, and with the passing of the IRA, we believe the timing for investment is increasingly attractive.

* The Inflation Reduction Act of 2022 is a landmark United States law which aims to curb inflation by reducing the deficit, lowering prescription drug prices, and investing into domestic energy production while promoting clean energy.

** The Indxx Hydrogen Economy Index tracks the performance of 30 global companies that provide goods and/or services for the hydrogen industry, including hydrogen generation and storage, transportation and supply of hydrogen, fuel cells, and hydrogen fueling stations.

Indxx is not a sponsor of, or in any way affiliated with, the Direxion Hydrogen ETF. Investments cannot be made in an index.

Direxion Shares ETF Risks – Investing involves risk including possible loss of principal. There is no guarantee the investment strategy will be successful.  Hydrogen companies may be significantly impacted by obsolescence of existing technology, short product cycles, falling prices and profits, competition from new market entrants and general economic conditions.  In addition, intense competition and legislation resulting in more strict government regulations and enforcement policies and specific expenditures for cleanup efforts can affect the industry. Because this is an emerging industry, companies are generally smaller and the share price of hydrogen companies may be more volatile than companies operating in other, more established industries.  Additional risks of the Fund include, but are not limited to, Index Correlation Risk, Index Strategy Risk, and risks associated with the market capitalizations and sectors of the securities in which the Fund may invest. Please see the summary and full prospectuses for a more complete description of these and other risks of the Fund.