Is the Hydrogen Hype Real?

Hydrogen is the simplest element on earth, and makes up over 90% of all the atoms in the universe. It’s also the building block for Hydrogen gas.

Hydrogen’s simplicity and versatility offer lots of applications for integration into renewable energy, but until recently, its high cost made it less attractive than other sources. This is rapidly changing.

Hydrogen is the New Solar ─ Maybe Much Better

Hydrogen is one of the most promising sources of clean fuel on the world’s path to net-zero emissions. The Fuel Cell & Hydrogen Energy Association’s (FCHEA) forecast for future demand sees over 15 million metric tons of increased demand for hydrogen as a feedstock, and that number is roughly the same in both the base and ambitious cases. We view this is as an incredible case of support for hydrogen as an efficient and low-cost input for powering machines or industrial processes, especially in areas where pure electrification is not possible. Transportation fuel sees the largest divergence between the two scenarios, with an ambitious target representing 27 million metric tons per year. In many ways, there are similarities to the hydrogen industry today and solar a decade or so ago. 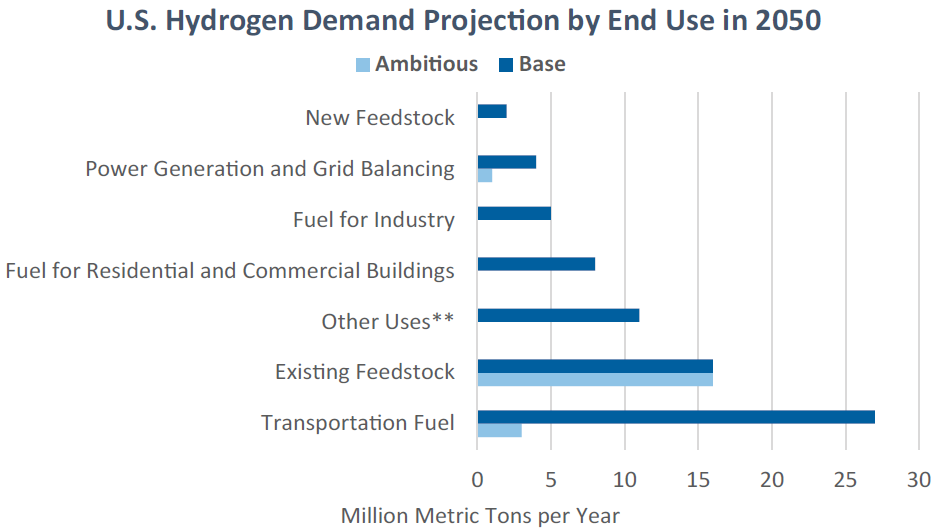 Source: FCHEA, as of December 31, 2020, data in million metric tons per year. *Base scenario underlies assumption that hydrogen market will not be greatly supported at federal level. Ambitious target would see hydrogen championed as necessary tool for decarbonizing the country. ** Other uses includes synthetic jet fuel and ammonia as fuel for shipping, assuming 20% of jet fuel could be met by synthetic fuel and 20% of marine bunker fuel by ammonia. Forecasts are inherently limited and cannot be relied upon. Actual results may vary.

The first hydrogen fuel cell electric vehicle (FCEV) prototype was unveiled in 1966, but it was not until 2013 that the world’s first production FCEV was launched. Considering the small size, the number of hydrogen-fueling stations in the US is modest. At the end of 2019, there were 183 total stations in the US. According to projections from the FCHEA, the number could jump to 5,800 if ambitious deployment targets occur. 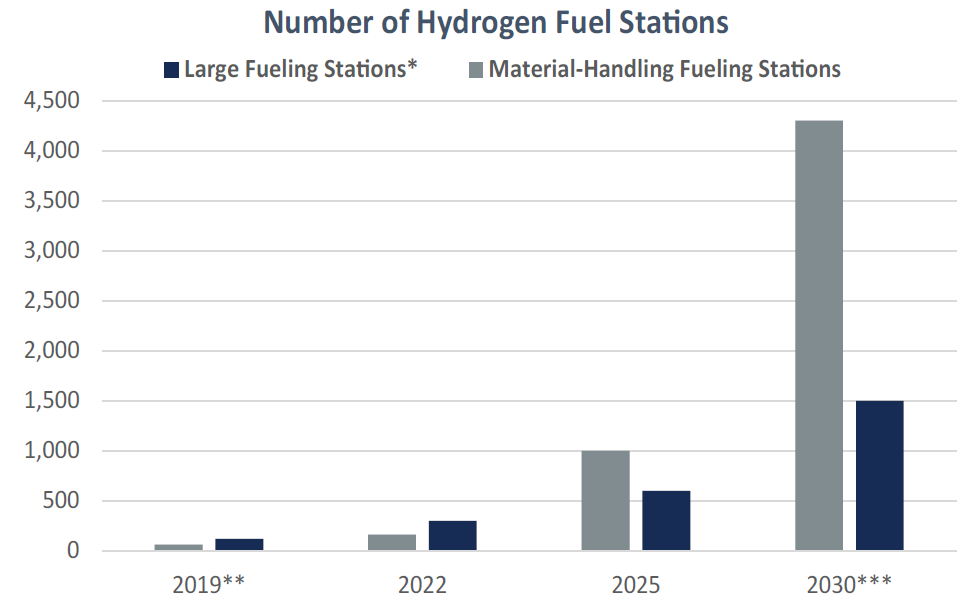 Governments around the globe, including the United States, are making coordinated efforts to promote green energy. A large percentage of the proposed $2.6 trillion American Jobs Plan (AJP) is dedicated to clean energy and environmental initiatives. Rather than taxes and regulations, the AJP proposes significant tax credits to incentivize the production and use of clean energy sources. According to Goldman Sachs, federal investment, production, and vehicle tax credits will subsidize about $15 billion per year in clean energy. The AJP proposes to increase these credits to about $40 billion per year or more. The extent to which hydrogen will play a role in all of this remains to be determined, but it is garnering considerable attention today given the versatility hydrogen has in application across renewables.

The Future of Clean Hydrogen. There’s an ETF for That

The Direxion Hydrogen ETF (NYSE: HJEN) seeks investment results, before fees and expenses, that track the Indxx Hydrogen Economy Index. The Index tracks the performance of companies providing goods and/or services related to the Hydrogen Industry. Close to 40% of HJEN is comprised of Fuel Cell and Battery-related companies. These companies manufacture fuel cells and batteries running on hydrogen-based technology. Hydrogen Production and Generation companies that are involved in the process of hydrogen generation, either in liquid or solid form, represent 25% of the ETF. Hydrogen Systems and Solutions firms offer equipment, components or technology used in hydrogen industry are close to 22%. Lastly, Hydrogen Storage and Supply companies, which are engaged in providing storage and transportation services of hydrogen, round out the fund with 14% exposure.

Indxx is not a sponsor of, or in any way affiliated with, the Direxion Hydrogen ETF. Investments cannot be made in an index.

Direxion Shares ETF Risks - Investing involves risk including possible loss of principal. There is no guarantee the investment strategy will be successful. Hydrogen companies may be significantly impacted by obsolescence of existing technology, short product cycles, falling prices and profits, competition from new market entrants and general economic conditions. In addition, intense competition and legislation resulting in more strict government regulations and enforcement policies and specific expenditures for cleanup efforts can affect the industry. Because this is an emerging industry, companies are generally smaller and the share price of hydrogen companies may be more volatile than companies operating in other, more established industries. Additional risks of the Fund include, but are not limited to, Index Correlation/Tracking Risk, Index Strategy Risk, Natural Disaster/Epidemic and Market Disruption Risk, and risks associated with the market capitalizations and sectors of the securities in which the Fund may invest. Please see the summary and full prospectuses for a more complete description of these and other risks of the Fund.